Presidential campaigns are utilizing the latest real time advertising trading technology to support their efforts for the 2016 U.S. presidential election. This fall has proven to be an important stretch for both campaigns in the lead up to Election Day. With the first and second general presidential election debates behind us, and Mr. Trump’s recent video scandal, we anticipated that we would see shifts in overall programmatic video and display advertising spend. Today we’re taking a closer look at how the parties have strategically used programmatic in their bid to win the White House.

The data we studied represents total programmatic spend from the GOP, DNC, and affiliated PACs on ads related to Election 2016. A few things to note from our analysis:

Donald Trump issued a videotaped apology last Saturday after a 2005 recording surfaced that showed him speaking in vulgar terms about women, setting off a firestorm in the Republican Party.

Here is my statement. pic.twitter.com/WAZiGoQqMQ

The apology came as he faced mounting criticism from Republican leaders after the video was released to the public. The three-minute recording, which was originally obtained by The Washington Post, captures Mr. Trump talking about aggressively pursuing women and boasting about being able to get away with “anything” because of his celebrity. Republican officials and donors have reportedly encouraged party members to distance themselves from their own presidential nominee, which has been reflected in depressed levels of spend. 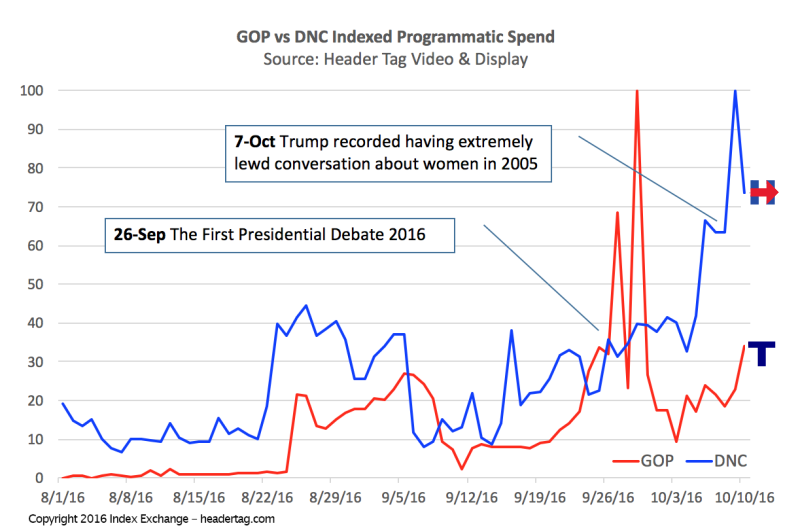 Conversely, in an apparent response to the video controversy, the Democratic Party’s programmatic spend reached its highest levels in the month of October. These trends offer unique insight into the differences between the two campaigns. While the Trump campaign spent heavily to gain public favor heading into the presidential debates, Hillary waited for a moment of weakness to present itself and capitalized on it. The presidential debates are foreseeable battlegrounds for the campaign; whereas the scandal was an unexpected event that Democratic strategists were able to convert into a strategic advantage.